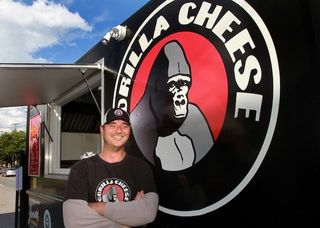 Gorilla Cheese was not the first food truck business in Hamilton, but owners Graeme Smith and Scott Austin might have been the first to announce their ever-changing location on Facebook and Twitter. It’s this urban-savvy marketing combined with their innovative curbside menu that attracts great crowds wherever they set up shop.

“Originally I developed the project as a restaurant,” he recalls. After graduation, he was ready to follow through with his plan until his long-time friend got him thinking outside the box. “Scott came up with the idea of a food truck. We started researching the same day. I had no idea until then that they were such a massive trend in the United States.”

Gorilla Cheese’s popularity is no accident. With a small crew of employees they work long hours in a hot truck, producing comfort food with a twist. Who would have thought a grilled cheese sandwich could create such buzz? By adding things like bacon, apples and maple syrup (the Lumberjack), or turkey, pear and cranberry sauce (Quirky Turkey) to the requisite cheese and bread, they have elevated the status of North American street food to a new level.After just one year in business, the demand for their portable menu has outstripped their one-truck capability. “It kills me to turn down so many functions,” says Graeme. Their second truck is on order, and should hit the streets in late 2012. “Another truck will let us travel out of town, or be in two places at once in Hamilton.”

That’s great news for fans who check their phones before deciding on lunch, and for the rest of the Golden Horseshoe hungry for a twist on tradition.