COVID-19 Update – OUR DOORS ARE OPEN! 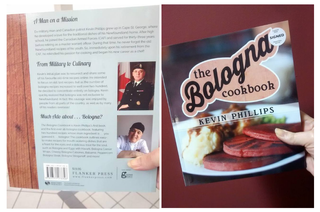 There are many fascinating paths to success using culinary arts training. Many people that come to Liaison College have enjoyed other careers. Graduate Kevin Phillips went from “Military to Culinary” and is the author of award winning cookbook, The Bologna cookbook. www.flankerpress.com.
The Bologna Cookbook is Kevin Phillips’s first book, and the first ever all-bologna cookbook, featuring two hundred recipes whose main ingredient is . . . you guessed it . . . bologna! #8 on the Globe and Mail (Cooking/Food) Bestseller List (September 20, 2014)